What is an EPIRB? 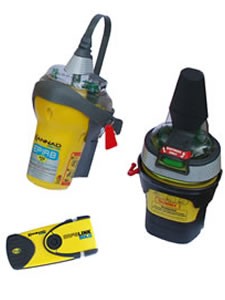 An Emergency Position Indicating Radio Beacon or EPIRB is used to alert search and rescue services in the event of an emergency.It does this by transmitting a coded message on the 406 MHz distress frequency via satellite and earth stations to the nearest rescue co-ordination centre.

Some EPIRBs also have built-in GPS which enables the rescue services to accurately locate you to +/- 50 metres.

EPIRBs are generally installed on boats and can either be operated automatically after an incident or manually. In most countries they are mandated to be used in all commercial shipping. However, they are also used on yachts and leisure boats.

When the EPIRB is activated it transmits on the frequencies 121.5 MHz and 406.025 MHz. An analogue signal is emitted on 121.5 MHz and a digital signal is transmitted on 406.025 MHz. After the EPIRB is activated, the next passing satellite will detect the transmitted signal and relay it to an an­tenna at a ground station, called an LUT.
For the 121.5 MHz signal the satellite must be within line of sight of both the EPIRB and a ground station. The ground station or LUT has a 2500 km satel­lite reception radius centred at the LUT. In areas without LUT coverage (mostly less populated areas in the southern hemisphere), signals from the 121.5 MHz transmitter will not be detected by the satellites, only by passing aircraft,This is not the case with the 406 MHz transmitter, because the satellites have a memory unit, which stores the signals for relay to the next available LUT giving it a truly global coverage. Once the signal is received by the LUT, it is proces­sed for location and sent to a Mission Control Centre (MCC). The MCC sorts the alert data according to geographic search and rescue regions and distributes the information to the appropriate Rescue Co-ordination Centre (RCC), or if outside the national search and rescue area, to the appropriate MCC that co­vers the area where the distress signal was detected. The RCC in turn takes the necessary action to initiate search and rescue activities.
The International Cospas-Sarsat System will cease satellite processing of 121.5/243 MHz beacons from 1 February 2009. From that date only 406 MHz beacons will be detected by the Cospas-Sarsat satellite system. This affects all maritime beacons (EPIRBs), all aviation beacons (ELTs) and all personal beacons (PLBs) 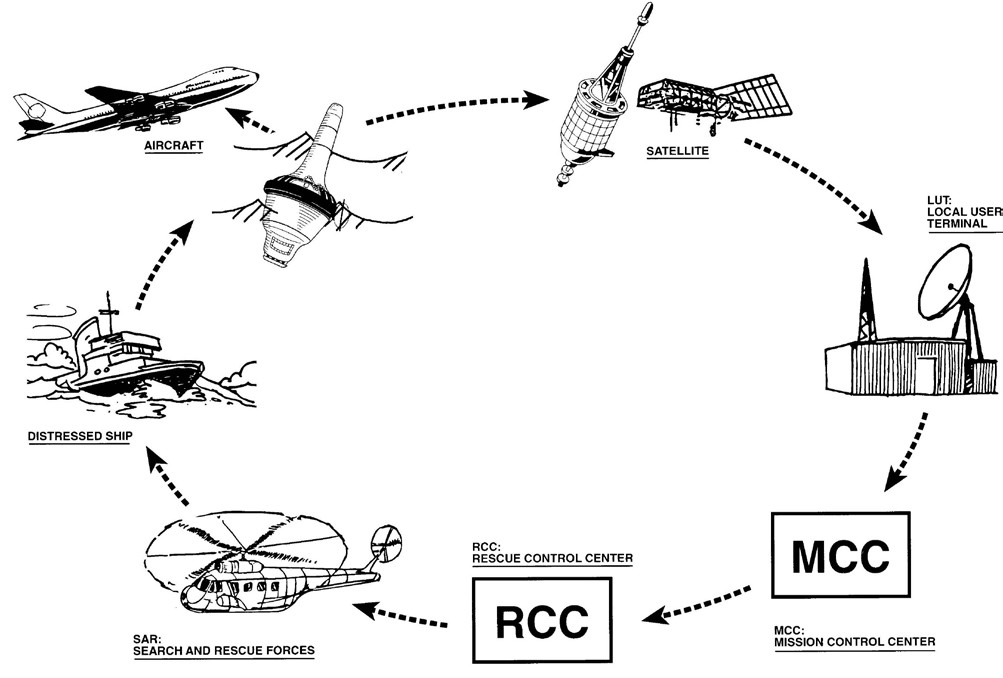 The location of the distress signal is determined by taking measurements of the doppler shift of the EPIRB frequency when the satellite first approach and then pass the EPIRB. The actual frequency is heard at the time of closest appro­ach (TCA). Knowing the position of the satellite and using the received doppler signal information, it is possible to determine the location of the EPIRB from the satellite at the TCA. At the LUT, actually two positions are calculated. One is the actual position (A) and the other is the mirror image (B) position. A second satellite pass confirms the correct location (A). With the 406 system the real solution can be determined on the first pass with a reliability of nearly 90% and down to an accuracy of less than 5 km (3.1 miles).

A SART – Search And Rescue Transponder – is a self contained, portable and buoyant radar receiver and transmitter designed to assist in the rescue and recovery of liferafts and survival craft by acting as a locating device. SARTs operate in the 9 GHz marine radar band; and when picked up by a searching ship’s radar they respond with a signal which is displayed as a series of dots on the radar screen.

A SART is normally stowed in the liferaft ready for any emergency. Once the unit is switched on it sits in stand-by mode, conserving power until it is automatically activated by the signal sweep of a passing vessel’s radar. The radar then instantly displays a straight line of 12 dots on the screen, alerting the ship’s crew that there is a survival craft within 100 metres of the last dot and enabling them to home in on the vessel or liferaft.

requirements, and are therefore tested to withstand the toughest of marine conditions. Once activated the transponder can remain in stand-by mode for up to 100 hours, thanks to its powerful integral battery, thus maximising the opportunity for rescue vessels to locate the emergency within the optimum human survival window.

Although SARTs are primarily designed to be used in lifeboats or liferafts, they can be deployed on board a ship, or even in the water. SARTs are normally cylindrical, about the size of a person’s forearm, waterproof, brightly coloured and buoyant.

There is a new type of S.A.R.T  that has enhanced specifications and it uses AIS as well. Signals from these new S.A.R.Ts are receivable by AIS Class A equipped ships (ships over 300 GTR) at a range of up to 10 miles, up to 40 miles by a S.A.R helicopter at 1000 feet or 130 miles by a S.A.R aircraft operating at 2000 feet.

The new AIS S.A.R.T (pictured left) has an inbuilt GPS unit and it will display an alert on any AIS chart plotter, radar or even PC operated AIS decoders by showing up as a red circle with a red cross in it.
It can be used as a MOB system or from a liferaft or vessel in distress because it is both lightweight and highly portable, meaning it can be handheld if required.
Once activated, it will fix its location by GPS within two minutes and has a 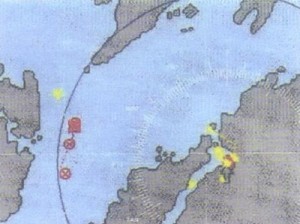 battery life of around 96 hours.
Obviously, the main benifit of the AIS SART over the normal version is the liklihood of a much faster rescue. When one takes to an inflatable life raft, you are then subject to the winds and tidal drift and in certain conditions you can actually drift a substantial distance away from the incident site, making it more difficult for SAR assets to locate you.

Helping To Save Lives