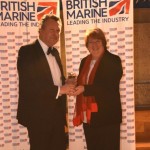 7th March 2016. Last Thursday evening, British Marine presented their annual awards for excellence at a black tie dinner at the Cutty Sark in Greenwich. At the dinner, the new award of Charity Of The Year was presented to the first ever winners, the National Coastwatch Institution. Presenting the award, Fiona Pankhurst, President of British Marine, was highly complementary about the work of NCI and the service we provide around the coast. Trustee Richard Hews accepted the award on behalf of the Charity.
A spokesperson for British Marine confirmed that the judges made their decision to award NCI Charity of the Year based on how the charity has made a big impact on a low budget, with no paid for employees and, whilst it is like many others, it has a huge reliance on volunteers. The charity is at the heart of the industry, protecting the whole country with its commendable safety programme. It was also noted by the judges how all volunteers will be given full training this year in the use of VHF radio.

NCI is a member of British Marine which is the organisation leading the UK leisure, super yacht and small commercial marine industry. One of their subsidiaries is National Boat Shows, organisers of the London and Southampton Boat Shows.