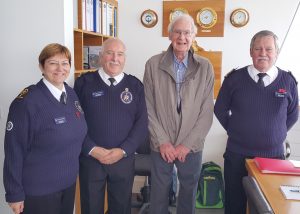 John Gifford OBE, the Honorary President of the National Coastwatch Institute, paid an informal visit to the station on the 30th October. John had previously visited Fleetwood when we were in the old Coastguard station, and said that he was amazed at the improvement in our facilities and equipment. John, who was accompanied on the visit by his wife, spent almost 2 hours observing a busy watch and talking with the watchkeepers and visitors to the tower. Following his visit, Bob Loynes (Station Manager) confirmed that The Honorary President had declared himself to be most impressed by the way in which we conduct our role here on the Fleetwood Coast, which he described as a testament to the work, time and effort which those involved in setting up the tower gave so freely.