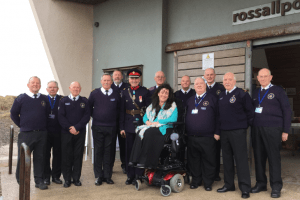 It was a red letter day for Fleetwood on Sunday the 19th February when we received an official visit from the High Sheriff of Lancashire, John Barnett MBE, DL. John, who was accompanied on the visit by his wife, Danielle, was welcomed by Station Manager Bob Loynes and members of the management team. A highlight of the morning saw the High Sheriff presenting 5-Year certificates and badges to a number of watchkeepers – who were each warmly congratulated on the lasting commitment they have shown to the work of the NCI. This was followed by a guided tour of Fleetwood tower, during which John chose to spend a considerable amount of time meeting watchkeepers on duty and observing our work first-hand. The High Sheriff thanked all of the volunteers for their dedication and remarked favourably on the high standards he observed.